Let’s start here. I met Campbell McGrath during my first semester at Indiana University – Bloomington. He was in town to do a master class with my fellow MFAers and doing a great deal of talking about his most recent collection at that time, Seven Notebooks. He took time with some of early work as a poet and sitting with me on a cafe patio overlooking Bloomington’s square he offered me advice on my work in terms of lyric consciousness that I, without any hesitation whatsoever, will say transformed me as a writer and helped me to propel my work in the direction it still holds today. McGrath ended that week-long visit with a reading that included a reading from his forthcoming work, Shannon.

Shannon is an epic poem set during the Lewis and Clark Expedition. The narrative follows 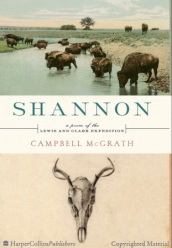 the youngest member of expedition, George Shannon, as he gets separated from the rest of the men after going after some lost horses. After a couple of weeks, he finds his way back to the expedition, but his experiences were actually never documented by Shannon or his more famous bosses. The idea here is that a young man given to wander becomes lost on the high plains of pre-America Sioux land and thus must encounter both internal and external portions of the universe worth pondering. No doubt it was attractive as a young poet that had just graduated from a stint and a degree in Montana and was trying to piece together a notion of being a writer and being a man. There was something in the work that spoke to my individual experience at the time. Perhaps still something I am trying to work out years later.

Nearly a decade later, I finally got around to finding a copy of this work and getting into what McGrath crafted, filling in the cracks of history with this epic. My return to this work was definitely spurred on in large part by my own personal work with the “Lester Ashagi and the Hunted Party” epic I’ve been at work at on-and-off for the last year or so. One tends to return to one’s roots and look for similarities when one researches new work they are crafting. So in to my life returns Shannon and McGrath, and neither failed to provide the sort of work I was looking for.

The work is fundamentally a mediation. One that searches for the place of young and intelligent in a raw open world that is both very alien and familiar, but also shows decided moments of cruelty and violence. There is a familiar loneliness that pervades Shannon, a anticipation of a return of those that we rely upon, that occasionally happens for some. He contemplates the manner laws can be placed onto land and people that know nothing of them, the role of God in the way that nature creates and destroys, and notions of that same divinity among ants. This type of material is nothing surprising in McGrath’s work, I’ve genuinely come to love it over the years with his other books. His does it well, reaches out at the right levels with the right lines of diction, and engages readers in the ways that good poets do.

“far-off two-note whistle of bird-song/high-low, not alone in the silence/not alone, breathing, eyes in the night/to keep me – Pollux, Regeuls, Aldebaran”

In a work that is so driven by the inferiority of the narrator, it is important to have these touchstones. These anchors enable the things that Shannon is working through to have an anchor in our physical world. This is the closest thing that poetry can offer to a picture, a postcard, of a voyage beyond the familiar, welcoming context of the world as we know it. Here is what the quintessential American pilgrimage into the transformative west looks like when it is done right.

That is just what McGrath does right with Shannon. He does not seek to colonize the great vastness of the American plains with an eastern voice. He lets it speak for itself and to consider the implications of the expedition and those that will surely follow. Shannon, although part of the great colonial exercise of the Lewis and Clark Expedition, does simply force his will upon the land itself. He instead uses the experiences he has with the land to work through quintessential aspects of his own psyche and nature. He moves through the unfamiliar without the need to steal nor name. The voyage is one of self-discovery, one that lets us see a man, if not an every man, in spite of the grandiose history that surrounds him. Here is an epic that illustrates that cracks in history are often the most important, the most telling of work, that modern poets and writers can craft meaningful material from. Shannon is some fine work, an epic worth engaging with to understand the manner in which we approach the land and how the land can change us. It is an illustrative poetic voyage that allows us to ponder one’s time apart.