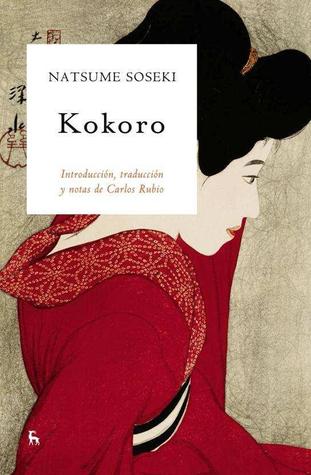 Original published in 1914 in Japan and to much acclaim, Natsume Soseki’s Kokoro  helped to mark the end of the Meiji Period (1868-1912) in the country. The word “kokoro” is translated as heart in English. Because of this we have to assume that novel explores what truly lies at the hearts of the characters involved. But I will tell that it must and does speak to larger, more society driven aspects regarding generations and the secrets or stories that come to define them.

Soseki’s novel is broken up into two narrative sections. The first and by far the largest of the two sections is the set in the contemporary world of the novel’s publication. The narrative is an university student who is the process of questioning his life and future. These questions are set against the backdrop of his meeting and subsequent relationship with an older man of the previous generation who he refers to as Sensei. The second section, which ends the novel, follows the narration of Sensei’s life prior to meeting the initial narrator. Through their relationship (as teacher to student or mentor to mentee) we see the manner in which life and anxiety changes but also remains quite similar between generations. However, the focus of Kokoro remains decidedly upon Sensei and his life and secrets regardless of narrative focus.

Perhaps. it’s best to say that Soseki’s novel is most interested in the inevitability of delay in it’s characters’ lives. It’s as if the world around them is constructed in a never ending sense of waiting. And in this waiting there is sense that the next great event, the next great moment to begin the next phase of life, the ability to break free from the muddled up mess of both the present and the past is just one, maybe two moments away from the time the characters inhabit. The transition between worlds is perhaps the best way to put this sentiment. It is a transition that seeks to resolve the errors of past generations (those represented by Sensei and to some extent the first narrators’ family) and move the present into the modern promise of life after that past. The waiting for this transition most typically comes in association with death. You couple take a page or five from the Golden Bough and say that in death of the previous generation there is a hope of renewal and the possibility for the characters to pull themselves from the hangover grayness of their modern world. The world of Soseki’s Kokoro is one that seems to be hinged upon the transition between generations. (for historic Meiji Japan to a more modern Industrial Japan) For readers, this waiting is a poignant sentiment that actually helps to drive the narrative forward.

The narrative is not crafted alone on this concept of waiting.  There is a large aspect of Kokoro’s story that rests on the idea of mystery , or perhaps more accurately said secrets. These secrets draw us through the story as readers. Our mainstay narrator is concerned with the back story of Sensei and what type of past could have made this man that the novel itself has become so taken with. Soseki does a wonderful job in terms of building of our compassion for both the narrator and Sensei and because of it, the plot flows through what would be a relatively uneventful period of time. We are drawn in not because of cataclysmic events of Hollywood proportions but because we are lead to fundamentally care about what makes these characters tick. And it is the revelation of these secrets that the story ends on.  That revelation comes from the voice of the character that it must (Sensei) and excels in most every way of settling all the anxieties and questions purposed by the primary narrative thrust of the novel.

On the whole, I must say the Soseki’s Kokoro stands up well to the test of time. It does so because it’s character driven approach to it’s plot that allows to ignore the mundane aspects of historical context and allows a view into what it simply means to human in those transitional periods of our existence. Soseki sets up the type of framework that you could argue has been used successfully in only a handful of novels that have been preoccupied with mentor/mentee relations. (see Kerouac’s On the Road, Fitzgerald’s Great Gatsby, and Palaniuk’s Fight Club) In that Kokoro gets so much of this framework right, this is novel worth another read in our contemporary world.